Welcome back to a balanced market.
Don’t be afraid.

As we noted here last month, the residential super cycle is over in Metro Vancouver. April’s action confirmed that, after two years of blistering sales and price increases, we are back to more balanced conditions.

As befitting a housing market that has defied all traditions since March 2020, the current calming is happening in midst of what, conventionally, is the most active selling season of the year.

The president of the Fraser Valley Real Estate Board, which saw April housing sales plunge 45.7% year-over-year and drop 36.6% from a month earlier, summed up what is happening:

“We would typically see a flurry of activity around this time of the year,” Sandra Benz said. “However, that’s not been the case so far. While it’s still too early to say whether this trend will endure, the slowing of sales combined with an increase in active listings is helping to restore a semblance of balance to the market.”

Just as very few predicted the latest super cycle, no one really knows how long the current moderation will last. There are clues to suggest this will not be a temporary lull. It will likely last until rising in-migration levels collide with a consistently low inventory of homes available.

So far this year, in-migration is near record highs while housing starts have fallen 40% from a year ago.

In the past couple of months, a combination of factors helped to slow Metro housing sales. These include clumsy government threats and actions, an increase in bank lending and mortgage rates and a push back against record-high home prices. While the former affected markets across Canada, the latter – price resistance – was seen locally first in the Fraser Valley and outlier B.C. markets before it surfaced in Greater Vancouver.

In Kelowna, for example, March sales were down 25% after prices soared 30% from a year ago. The Fraser Valley has experienced a near 50% drop in sales once prices had increased by more than a third from a year earlier.

In Maple Ridge, which had been posting the highest year-over-year price increases in Greater Vancouver, sales plunged 37% in April from a year earlier.

Across Greater Vancouver it is no coincidence that April sales of detached houses have fallen faster than any other type of residential property, down 41.9% from a year ago, after the benchmark price leapt 21% year over year to $2,139,200.

Since March, government measures to cool demand are mostly threats, but they have had an impact. The City of Vancouver plans to increase its empty home tax to 5% from 3%; the province plans to bring in a homebuyer “cooling-off” period to fix a problem that no longer exists; and the feds plan to ban foreign home buyers for two years, just as it is attempting to attract a record number of new immigrants.

None of these measures are needed and all are counterproductive, but they have helped to scare some buyers and builders out of the market.

Since investor are very active in the new condominium sector, government action and plans to tax pre-sales and speculation will have a direct detrimental impact on multi-family development.

Eventually, however, the fact that the housing supply is not close to keeping pace with population growth, largely due to immigration, will kick off another super cycle in Metro Vancouver housing sales and prices. This may not take long.

In the first quarter of 2022, total housing starts in Metro Vancouver had fallen to 4,308 units, down a shocking 41% from the same period last year. However, in the first quarter of 2022, B.C. also welcomed a net increase of 14,885 persons, including 12,606 immigrants. In 2021 B.C. net international migration accounted for an increase of 67,141 while net interprovincial migration added another 33,656. Most of these 100,00 plus newcomers settled into Metro Vancouver, where only 26,013 homes were built last year, including just 6,600 rentals.

Townhouses: The effect of low supply and high demand is and will be felt acutely this year in the townhouse sector.

Townhouses are very popular but just 481 have started construction this year across Mero Vancouver, down from 773 at the same time in 2021. Only 25 new townhouse units have been started this year in the entire City of Vancouver.

The benchmark price of a townhouse in Greater Vancouver is now $1,150,500, up 25% from April 2021 and nearly 12% higher than in February 2022. The low supply and high prices combined to drive townhouse sales down 40% in April compared to the same month last year. Without a dramatic supply increase, which seems unlikely, townhouse prices will keep climbing.

Here’s a summary of the numbers:

This is still a seller’s market with an overall sales-to-listing ratio of 52% and just a 3-month supply of total inventory. and the composite benchmark price hitting a fresh high of $1,374,500. This represents an 18.9% price increase over April 2021 and a 1% increase compared to March 2022.

Vancouver East Side: As the median price of an East Side detached house crested over $2 million for the second month, detached sales plunged 50% from a year earlier and dropped 36% from March 2022, to just 110 transactions. Sales of condominium apartments were also lower, at 178 units, as the median condo price held steady from a month earlier at $680,000.  The sales-to-listing ratio for townhouses dipped to 41%, the lowest level this year, even as the median price of the 65 sales dipped to $1,350,000, down from a four-month average of $1.4 million. Active listings were at 1,038 at month end compared to 1,244 at that time last year and 946 (up 10%) at the end of March; New Listings in April were down 8% compared to March 2022 and the supply of total residential listings is up to 3 months in what is cooling seller’s market.

North Vancouver: Despite pressure from senior levels of government to bypass public hearings on housing projects that already fit the official community plan, North Vancouver City recently pushed two proposals with a total of 118 strata units to such hearings. So far this year just 390 multi-family units have started in the city and most of these were rentals. Sales in April, at 275, were down 42% from a year earlier and 20% lower than in March 2022 Active Listings were at 497 at month end compared to 624 at that time last year. New Listings in April were down 3% compared to March 2022, down 30% compared to April 2021, with the overall sales to listing ratio at 58%. The composite home benchmark in North Vancouver is $1,438,000 and the typical detached house sold in April at $2,231,000, both virtually unchanged from March.

West Vancouver: Total housing sales in April, at 72, were down 18% from March and 38% lower than in April 2021 in a fairly balanced market. West Vancouver is primarily about detached houses, which accounted for 54 of the April sales. The benchmark detached house price is $3,380,200, which was up 2% from a month earlier. Active listings were at 502 at April’s end, compared to 554 at that time last year and 423 (up 19%) at the end of March 2022. New listings were up 32% compared to March but down 16% compared to April 2021. Total supply of residential listings is up to 7 months, with a relatively modest sales-to-listings ratio of 30%.

Ladner: Outlier markets are seeing the largest sales slump and Ladner was no exception as April transactions dropped 39% from March 2022 to just 34. There could be price resistance, as the benchmark detached house price fell 0.6% from March to $1,517,800, the first month-over-month decline in more than two years. Condo apartment prices rallied, however, increasing 6.2% month-over-month to $692,600, reflective of the new condo construction in 2021. Total active listings were 86 at month end in April compared to 117 at that time last year and 79 at the end of March. The total supply of residential listings is up to 3 month’s supply, with a sales-to-listings ratio at 61% compared to 63% in March 2022 and 80% in April 2021.

Burnaby North: This market posted one of the largest sale declines in April, with total transactions down 46% from a month earlier and 48% below the pace in April of 2021.  Just 164 homes sold in April, while active listings were up 33% from March at 419. The detached house sector posted the second-lowest sales this year, at 38, which may reflect price resistance as a house is now selling for an average of $2,048,300. But the condo market is also waning with the 111 April sales and average price, at $754,034, both at the lowest level since January. The total sales to listing ratio is running at 47%, well below the 72% in March and the 68% a year ago.

Coquitlam: April housing sales, at 279, were down 30% compared to March and 11% lower than in April 2021, but Coquitlam’s housing future appears solid, with several large new developments coming. These include the 91.5-acre Fraser Mills waterfront site where 5,100 strata homes and 400 rentals are planned, and new strata homes at Burke Mountain. New listings in April were down 20% compared to March 2022 and down 21% compared to April 2021. The benchmark price for a detached house reached $1,847,800, up 25% from a year earlier but virtually unchanged from March. Condo apartments are selling for $712,500 and townhouses are benchmarked at just over $1 million.

Port Moody: The giant Coronation Park development was reluctantly approved in April, but the city added a costly last-minute demand that 15% of the homes – about 400 units – be below-market rentals, so the project may be delayed again after years of debate. Meanwhile, April housing sales plunged 39% from March and were nearly 50% lower than in April 2021. The detached house price is now benchmarked at $2,314,900, the highest in the Tri-Cities. There is just a 2-month supply of total listings available in this seller’s market.

Pitt Meadows: The Pitt Meadows market has calmed down but remains a seller’s advantage with just a 1-month supply of homes on the market and sales-to-listing ratio at a strong 77%.  April sales were 45 units, down 18% from March and just 6% below April 2021, which is a relatively strong performance. The benchmark price of a detached house dipped 1.5% from March, rare in Metro Vancouver, to $1,540,000. Total active listings were 51 at month’s end compared to 63 at that time last year and 53 at the end of March. 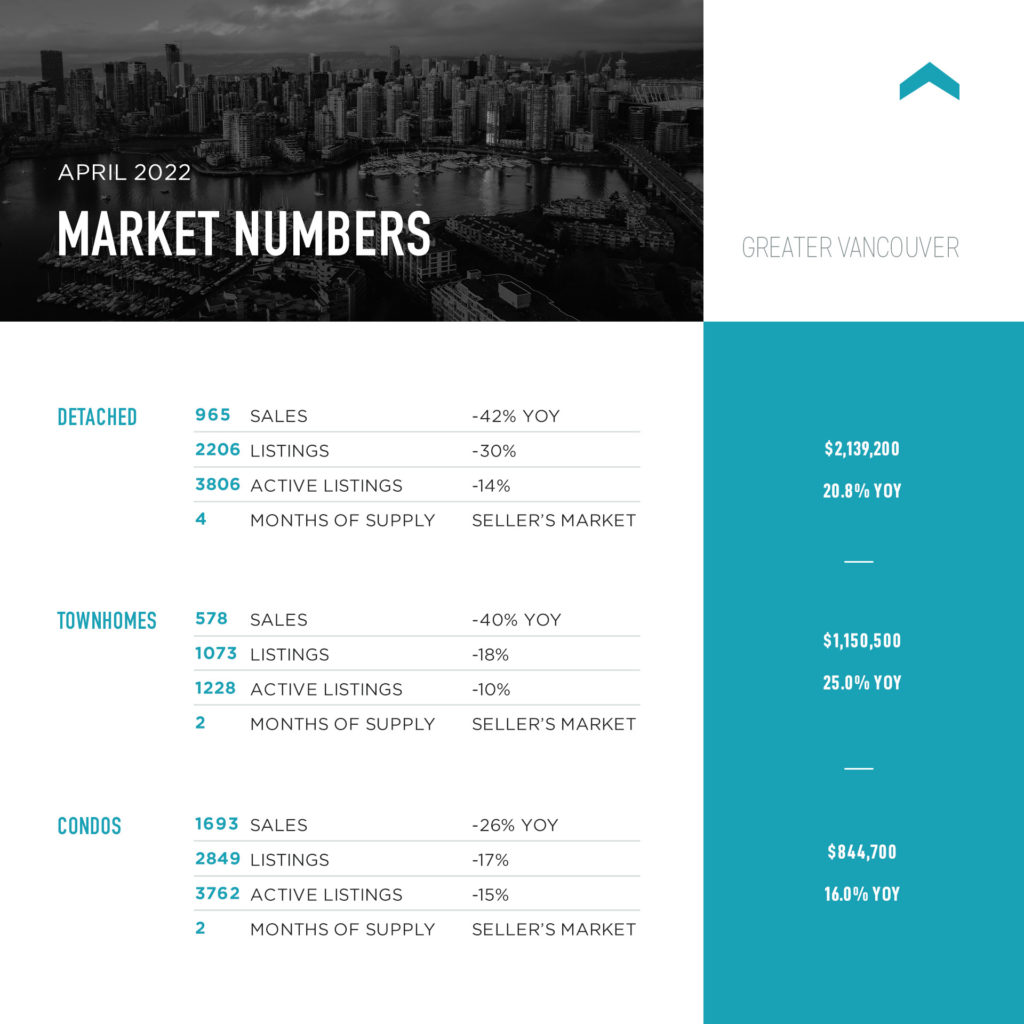 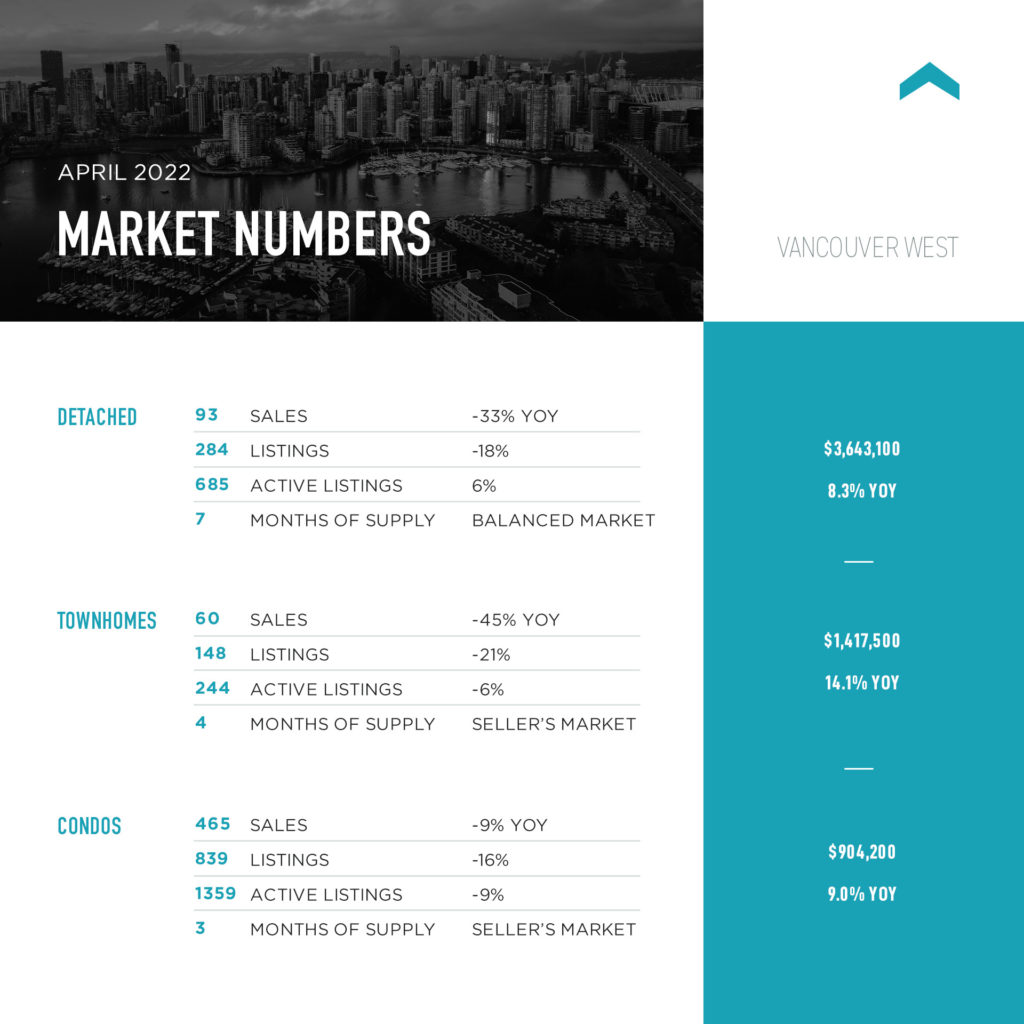 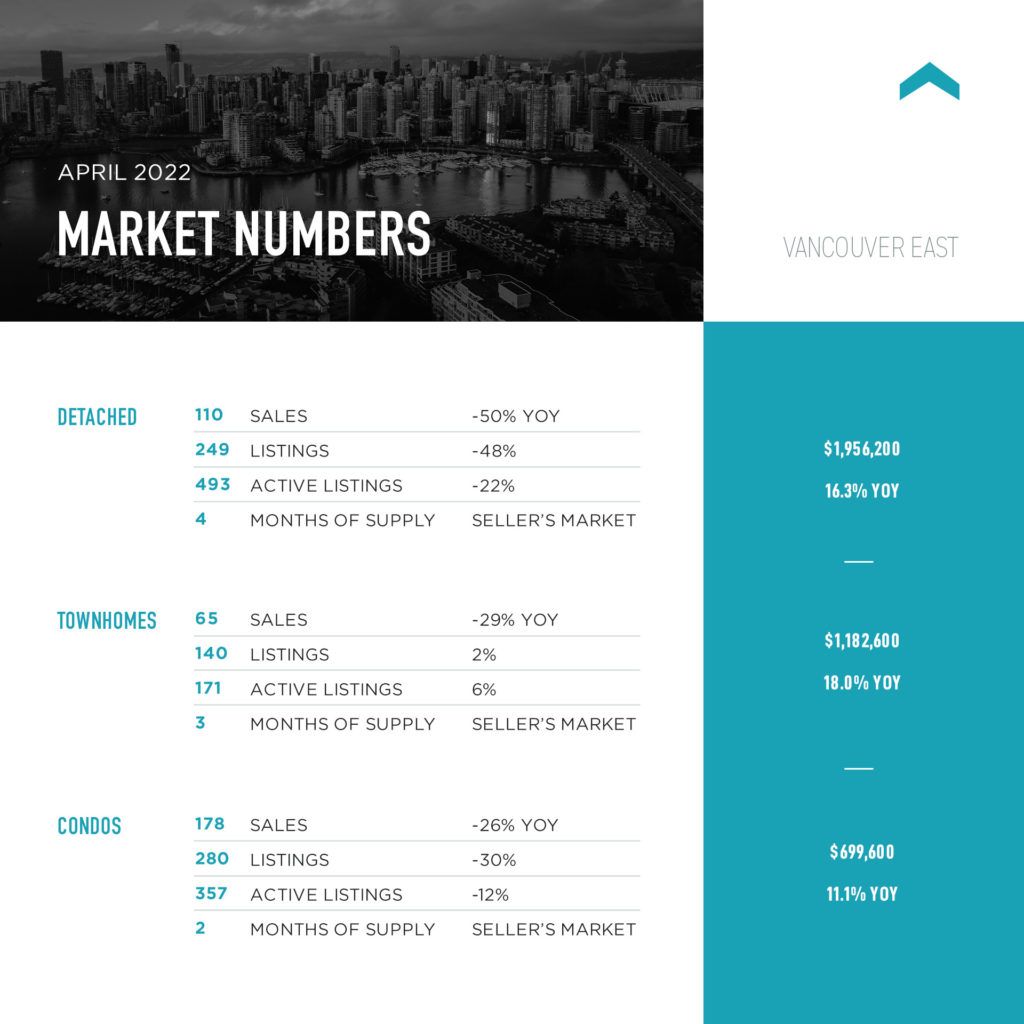 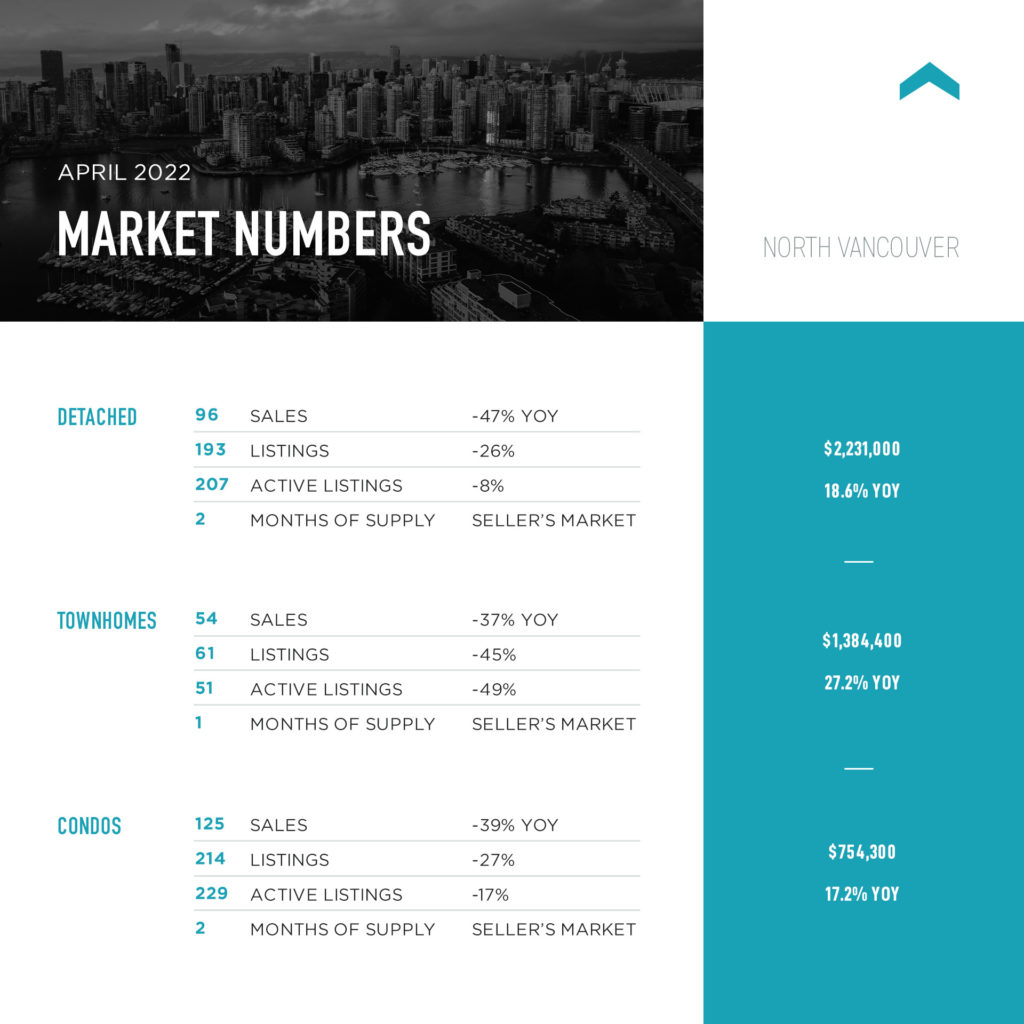 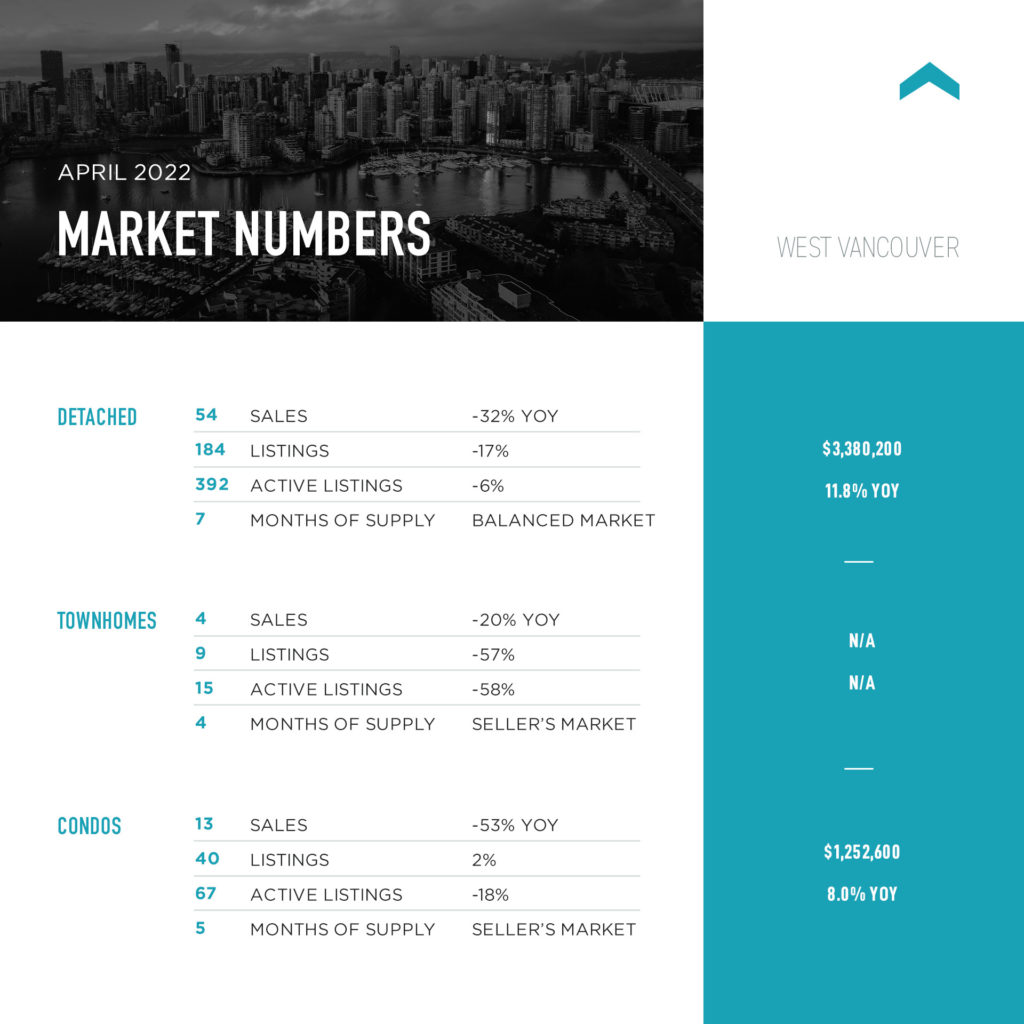